The Internet of Things has infected another formerly benign product that we use every day: shoes. Iofit, a company that was recently spun out of Samsung’s new startup accelerator, is here at Mobile World Congress to show off their soon-to-be-crowdfunded smart fitness sneakers.

While the idea of smart shoes isn’t terribly new, Iofit has managed to do something that feels a bit revolutionary with its Smart Balance shoes. The soles are lined with pressure sensors that help measure your how you shift your weight, how hard you’re hitting the ground, and your overall balance and center of gravity. The app visualizes this streaming data with charts and even heat maps of the weight distribution in each shoe. Each sneaker has a battery that lasts five to seven days, but they can be recharged wirelessly — so you (thankfully) don’t have to plug them in.

NO, YOU DON’T HAVE TO PLUG THEM INThe most surprising thing about Iofit’s smart shoes is that I was able to identify a few clear problems in my golf swing just two minutes into the demonstration I was given. This was all thanks to the way the Iofit app visualizes the data coming out of the shoes. Iofit’s chief marketing officer used the app to record a few of my practice swings, and then — still in the app — compared my footage to the swing of someone who is much better at golf.

The first thing he pointed out was that my hips were moving too much during my backswing. Using the in-app coaching tools, he drew a line that my hips should not cross. Sure enough, I blew right past the line during my swing. This part of the app is very robust, with slow-motion and side-by-side options, as well as the ability to put one video over another so you can directly compare footage of swings or postures. 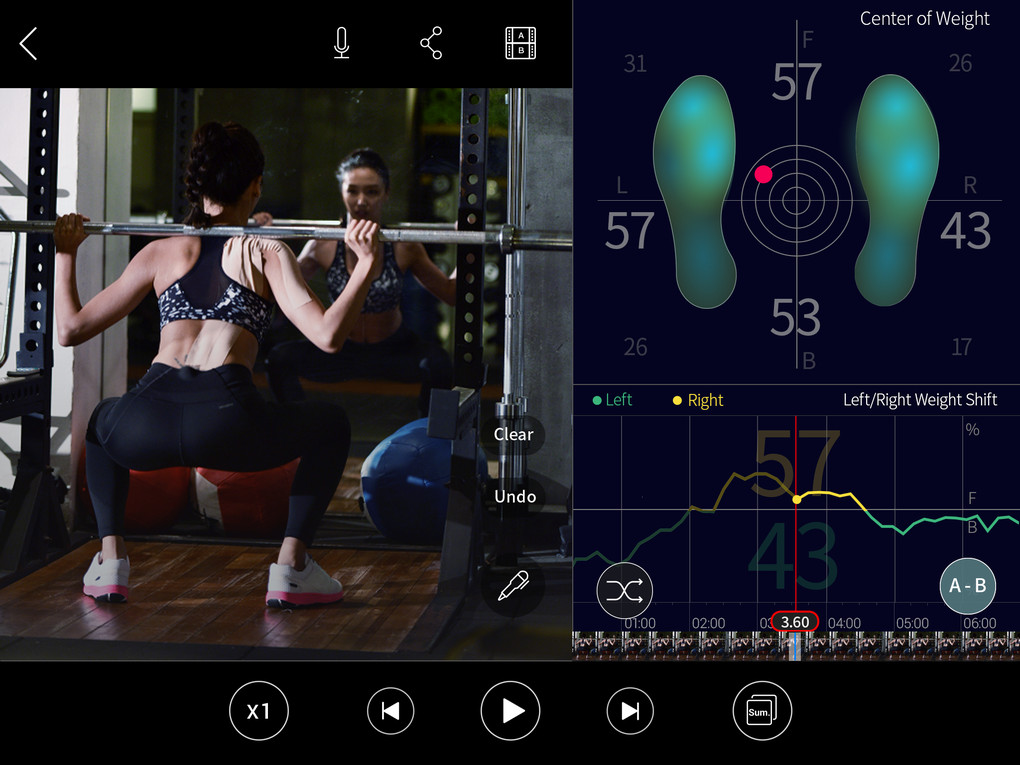 But video coaching is an even older idea than smart sneakers. The real value that Iofit offers is the data. I was so vainly focused on the footage of my swing that it took me a moment to pay attention to the streams of data being displayed below each video. Once I did, I could really see what was wrong with my swing. The charts showed me that I was shifting all of my weight to my back foot, pushing into the ground extremely hard, and leaning too far forward as I followed through. The data from the “pro” was stark in its difference — he distributed his weight much more evenly during his swing, and was leaning less as he followed through.

The smarts would be useless if the shoes were awful, but Iofit’s Smart Balance Shoes feel great. They’re extremely light and they feel really breathable, and that’s even considering that the pair I tried on were about a size and a half too small. The fitness sneakers have grippy soles, and the golf shoes feel sturdy enough to give you the necessary support for when you’re hacking away on a course.

As we learned last week, Iofit will be bringing the Smart Balance Shoes to Kickstarter later this year. The retail price for the fitness sneakers will eventually be $199, and the golf shoes will cost $249, but each will be cheaper on Kickstarter — if you can get to them fast enough.

Want to join the discussion?
Feel free to contribute!